The M. Arch program locates the work of architecture at the intersection of disciplinary principles and professional competency. Ideas become impactful when translated into material conditions. The messy process of translation often results in imperfect but meaningful design proposals that address challenges of contemporary life. Embracing the compromise between ideal and real underscores our commitment to the here and now.

Woodbury School of Architecture’s Making Complex is a platform for experimentation and advanced fabrication. Discover how Woodbury is exploring new technologies to rethink the future of architecture and push the boundaries of design.

All architecture and interior design programs at Woodbury have been designated as STEM degrees. The School of Architecture received approvals internally from the University Curriculum Committee and Office of Academic Affairs, and externally from WASC (WSCUC) and the Department of Homeland Security’s Student Exchange Visitor Program (SEVP). Starting in the fall of 2020, students enrolling in the following programs will graduate with STEM-designated degrees:

All international students enrolled in these programs can now apply for a 24-month extension of their post-completion OPT (Optional Practice Training) for a total of 36 months.

Our Master of Architecture program is among the first four accredited graduate programs nationwide to be accepted for participation in the National Council of Architectural Registration Board’s (NCARB) Integrated Path to Architectural Licensure (IPAL) initiative. Find out more about the IPAL initiative. Woodbury’s School of Architecture offers the unique opportunity to expand knowledge about Interior Design through a ID Emphasis. Four courses can be taken from the Interior Design program as electives in the MArch program to expand an understanding of human experience and interaction with space. Find out more about the courses through our Interior Design Emphasis page. View the course requirements for our 2-year and 3-year M.Arch programs via the buttons below:

Woodbury University alumnus Henry Cheung graduated from the Master of Architecture program (MArch) in 2013. After his graduation he joined Bestor Architecture in Los Angeles and has worked on such high-profile projects as the Beats by Dre headquarters in Culver City.

“Beats by Dre HQ in Culver City is one of those projects that I will never forget. I learned and developed tremendously as a designer, creating spaces that were both conceptually profound, graphically punchy, while maintaining a balance between play and function.” 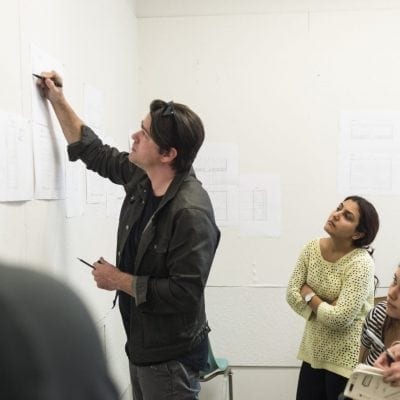 Our faculty are architects, designers, academics and policy makers practicing in Los Angeles, San Diego and Tijuana. This internationally recognized and award-winning group works closely with students to teach the skills required to push the limits of practice. NAAB: The MArch program at Woodbury School of Architecture is NAAB accredited.

WASC: Woodbury University is accredited by the Western Association of Schools and Colleges (WASC) Accrediting Commission.